Fire in the Pantanal: the home of its traditional communities is burning

When one thinks of the Pantanal region, what comes to our mind are huge flooded areas. In fact, the Pantanal is the world’s largest wetland. Located in the heart of South America, it encompasses parts of Bolivia and Paraguay, yet lies mainly in Brazil, comprising the states of Mato Grosso and Mato Grosso do Sul. Over and beyond its exuberant nature, this ecosystem is comprised of a sociocultural mosaic of traditional communities who self-identify as Pantaneiras[1] – collectives and groups of families inhabiting, living and coexisting in the Pantanal, with their ways of living shaped by the water cycles.

The Pantanal communities have extensive environmental, ecological, and cultural knowledge about the use and management of the Pantanal’s natural commons and territory. For these communities, the Pantanal is a large basin that only exists because of the basin’s beira, parede, and fundo, or roughly its edge, wall, and bottom – a huge biocultural and environmental corridor that connects the Cerrado and the Amazon regions.

Resulting from the encounter of the indigenous peoples that inhabited the region before the arrival of the Europeans and black people who came from the African continent, Pantanal communities are organized on the basis of the use they make of the territory, i.e., family farming, fishing, harvesting, and other forms of occupation.

These communities are spread throughout the Pantanal’s diverse environments, exhibit different characteristics, and are shaped by the water cycles, or the annual flood pulse. Flooding happens especially from October to January in the Higher Pantanal region, and from December to March in the Lower Pantanal region. These periods have changed a lot over the past years. Recently the extreme drought period has become a challenge for the communities inhabiting the region, as it has become increasingly drier on account of shorter rain seasons.

These contrasting periods, along with the 2020 wildfires, have seriously impacted the Pantanal’s various traditional territories. The environmental tragedy brought about by fires, with images of burning vegetation and dead animals, was extensively covered by the media. Less divulged, however, have been the impacts on the region’s communities. When the Pantanal burns, what burns are the homes of these communities.

From January to October of 2020, the most critical wildfire period, fires devastated about 4.1 million hectares [approximately 10.1 million acres] of the Pantanal, according to the Laboratory for Environmental Satellite Applications (Lasa, in the Portuguese acronym) of the Federal University of Rio de Janeiro (UFRJ)[2], roughly 26% of its total area – a threefold increase in comparison with 2019.

For the communities of the Pantanal, the spread of these fires was no surprise – they had already warned that there would be a period of severe drought based on such signs as the interruption of the flooding of bays. Still, these fires overwhelmed everyone. This is explained in part because the fires in the region are different from the fires that occur in Amazonia or in the Cerrado regions, since the Pantanal is a great deposit of organic matter when the water recedes during the dry season. This organic matter ferments and accumulates gases; thus, fire also happens in subterranean layers, which makes it much harder to control. Dryness and subterranean fire helped to fuel the criminal fires.

The criminal fires started on farms

The Pantaneiras traditional communities are calling the fires that took place in the Pantanal in 2020 forest arson, as they are criminal and intentional, caused by human action.[3]

In the Pantanal region, deforestation and the use of fire by agribusiness go together, often one after the other. Cattle ranching and soybean growing are concentrated on the edge of the basin, thus contributing to a cycle of wildfires that begins with deforestation and is followed by fires designed to clear a given area and turn it into pasture land which, in the Upper Pantanal area, may later become farmland for growing soybeans and other monoculture crops. Such expansion affects traditional territories, because it interferes in the dynamics of the Pantanal ecosystem, on which the communities depend.

This cycle is one of the explanations for the catastrophe experienced that year, whose repercussions are still present, as fires of the same proportion are still raging. According to data by INPE[4], from January to September of 2021 there were more than five thousand fires in the Pantanal. In 2020, there had been 22,116 fires. Agribusiness was the trigger that set off these large-scale fires.

[3]
ust like the Pantanal communities, the Agro é Fogo alliance has avoided the use of the term queimadas [some like burning] when referring to the criminal fires [incêndios, some like arson] that have ravaged the country. This way, we distinguish a wildfire and the slash-and-burning traditionally used by traditionalcommunities from the criminal fires caused by agribusiness.
[4] 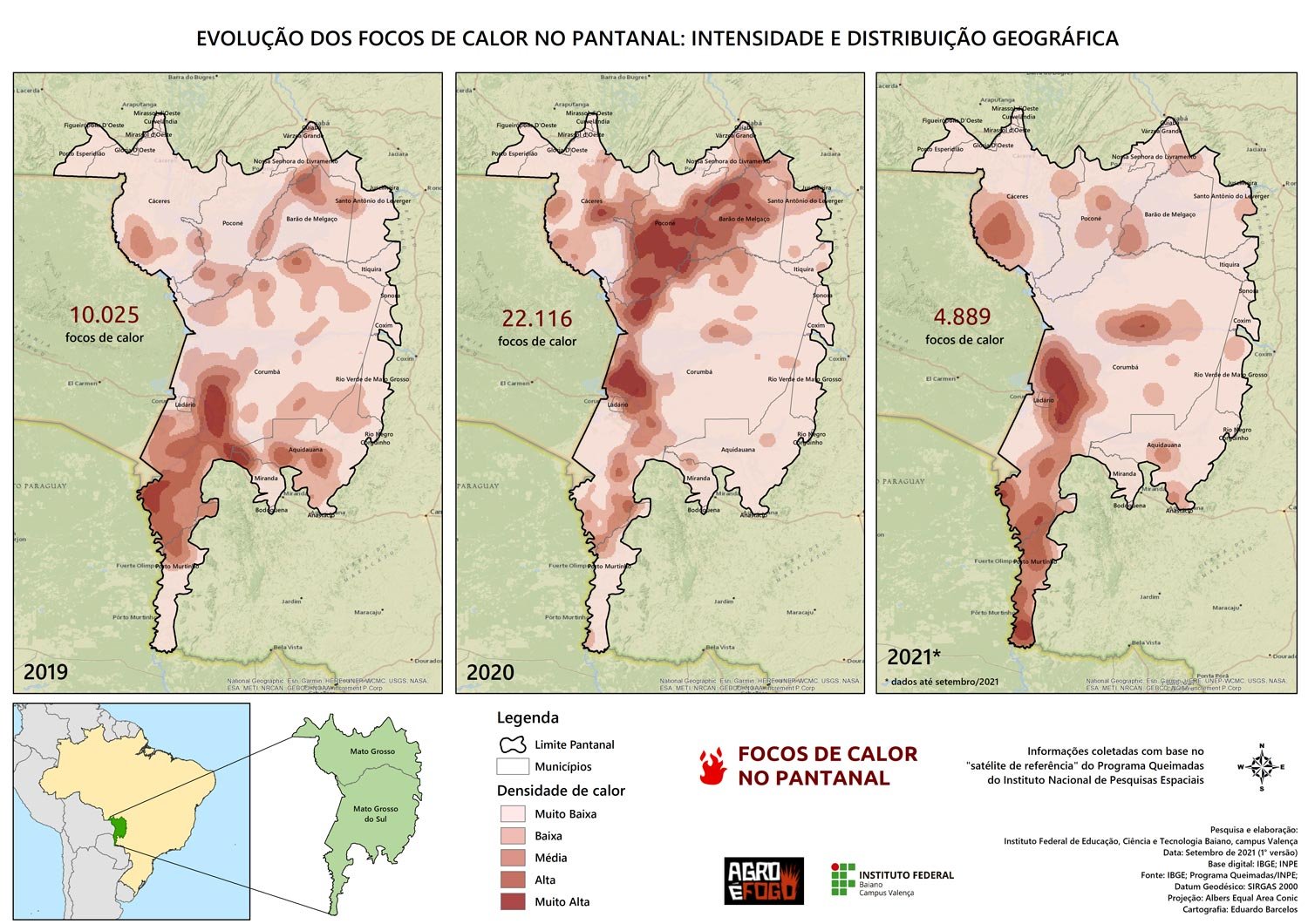 Expert reports[7] issued by the state of Mato Grosso’s operational coordination agency Centro Integrado Multiagências de Coordenação Operacional (Ciman-MT) also showed that the fires in the Mato Grosso area of the Pantanal were caused by human activity. Ciman filed the documents with the Environmental Police for an investigation to be started and those responsible charged, but the process never started. The Mato Grosso do Sul and Mato Grosso states attorney’s offices released a technical report that showed that nearly 60% of the fire outbreaks that affected the Pantanal in 2020 were caused by human action, in all likelihood in association with farming activities.[8]

See communiqué on Mato Grosso do Sul’s office of the state attorney’s website,

According to official data by Mato Grosso State’s Department of the Environment (Sema)[9], from January through September 2020, more than 5,000 hotspots were detected in private properties, around 3,000 of which on indigenous lands and 890 in conservation units. Fines in excess of R$ 107 million have been levied for irregular use of fire. In total, government agencies have imposed R$ 805 million in fines for environmental crimes, including man-made fires and illegal deforestation.[10]

Of the five expert investigations conducted by Ciman, the one into the SESC Pantanal Private Natural Heritage Reserve, in the Barão de Melgaço region, was particularly striking. The investigation concluded that the cause of the fire was intentional burning of vegetation for pasturelands, with the fire ultimately reaching the reservation. Logs and wooden fence poles were found in the area, as well as some gallons of diesel oil, apparently used to burn them.[11]

In Mato Grosso do Sul, INPE also reported a record number of fires from January through December 2020, totaling 8,809 fire outbreaks in the state’s Pantanal area. Corumbá City reported 91% of total fires, with 8,105 hotspots.[12]

Based on satellite images by United States’ NASA and Brazil’s INPE, Federal Police experts found evidence showing the fires had started on four rural properties also in Mato Grosso do Sul[13]. The Federal Police questioned farm workers and local residents, who corroborated the findings. According to the experts’ analysis, the outbreaks began on June 30, almost at the same time, in four rural properties west of the Paraguay River. To the Federal Police and the Federal State Attorney’s Office, this indicates that the practice of setting the vegetation on fire to grow pasturelands may have been arranged by the farmers.

Evidence of the criminal intent of these fires was presented by the Federal Police in March 2021, during the second extraordinary meeting of the Chamber of Deputies’ Foreign Committee, charged with following and promoting a national strategy to combat fires in Brazilian biomes.

Document presented at a meeting of the lower federal house Chamber of Deputies committee on the Pantanal fires.

It may be argued that, for agribusiness, fire is a cheap tool to clean an area and often expand pasturelands. For the pantaneiras traditional communities, whose livelihoods are based on managing and using the Pantanal, the forest fires caused huge transformations and devastation. All their knowledge and skills are closely interrelated and connected with the environment in which they live: the Pantanal itself.

One of the communities affected was the pantaneira community of Barra de São Lourenço, in the municipality of Corumbá. The community was seriously affected by the fire. Three families had to be rescued by the Fire Brigade, and a child drowned trying to escape the flames. The community also had to face an ash fall that, coupled with the drought, turned the water brown.[14]

Therefore, the devastation wreaked by forest fires is much wider than what it appears to be at first sight. Countless food crops were lost. Whole communities stopped using water from rivers, as they were contaminated by ash. Impacts still linger: we are still taking stock of the losses and seeking alternatives to continue to exist in the Pantanal. It is imperative that we recover the territories of the traditional communities of the Pantanal region, particularly in the Lower Pantanal area.

All forms of life were impacted. This brought great spiritual suffering according to our elderly. Resilience has been our tool to resist and reconnect with our homeland. From now on, ecological recovery is our main undertaking toward regaining spiritual harmony. We do not know how long it will take, but we know that the strength of our forebears will be our foundation!

In the Pantanal there are people!

In the Pantanal there are traditional communities that resist in order to continue existing!

See, in this dossier, the case of Barra de São Lourenço.

The Erosion of Agrobiodiversity and Food Cultures

THE EXPANSION OF MINING ON INDIGENOUS LANDS:

An enemy with hooves of iron and gold

FIRE IN THE PANTANAL:

the home of its traditional communities is burning

Fuel for Destruction of the Amazon, Cerrado and Pantanal

The Minas-Bahia and Eastern Amazon frontiers